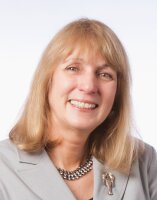 Pat Gill's primary areas of interest are film and media theory; feminist theory and gender studies; cultural and popular cultural studies; psychoanalytic theory and contemporary theories of interpretation. She explores the interpretive and affective force of written and visual media, especially that of popular films and television, investigating the reasons why audiences find these media entertaining and how they entertain. Employing psychoanalytic concepts of human understanding as well as discursive theories about the ways in which meaning is formed, she studies visual language and narrative to consider the social and psychological implications of the industrial production of pleasure. Her courses in film and television and in critical cultural studies examine the ways in which the media can be seen to help to construct and reinforce as well as to be constructed by reigning conceptions of class, race, gender, and sexuality. In bringing contemporary interpretive theories to bear on media constructions, images, and responses, Professor Gill analyzes the cultural assumptions informing each production -- the cryptic, accepted allusions to a knowledge not within the frame of the picture that allows comprehension of a scene or image or the determination of a meaning.

Professor Gill has written on feminism, film, families, and filth. Her more recent work concerns the construction of masculinity, the manipulation of class positions, and the relation between interpretation and justice.