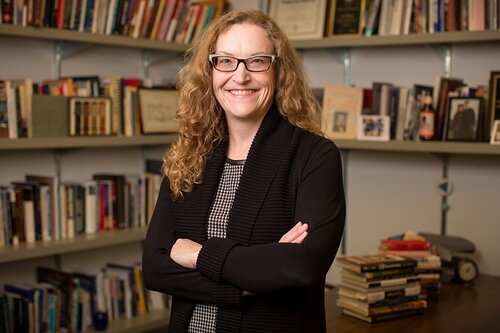 Cara Finnegan is a Professor in the Department of Communication. She holds affiliated appointments in the Center for Writing Studies, Gender and Women's Studies, and Art History. She was named a University Scholar in 2017.

Finnegan's research examines the role of photography as a tool for public life. Photographs are powerful forms of communication: they visualize social issues, make visible those who are often invisible, and foster or limit bonds of identification. Her book-length projects are best described as rhetorical histories of photography, in that she examines the production, composition, circulation, and reception of photographs at specific moments in U.S. history. Her most recent book is Photographic Presidents: Making History from Daguerreotype to Digital  (University of Illinois Press, 2021).

Finnegan's ideas about photography and visual politics have been featured in a variety of publications in the fields of Communication and U.S. History, as well as in popular media outlets such as the New York Times, CBS, and Vox.

Professor Finnegan is a scholar of rhetoric, public address, and the history of photography. Her research and teaching explore the role of photography as a tool for public life.

CMN 538: The Problem of the Public

Winans-Wichelns Award for Distinguished Scholarship in Rhetoric and Public Address, 2016

View all publications on Illinois Experts